You are here: Home / Democracy / What it costs to get elected in NOTL

Looking at the campaign financial data reported after the 2014 election, spending by winners ran as high as $5 per vote for the Lord Mayor position and averaged $2+ for each vote received by new Council candidates.

You needed $100 ($200 for Lord Mayor) and 25 signatures to get your name on the Oct. 22 ballot. However, to actually make people aware of your candidacy, it takes a lot of time to knock on doors, attend candidates’ meetings and meet people in the different neighbourhoods of town. For most candidates, it also takes money – usually donations from businesses or residents – spent on signs, advertising, brochures, websites, meetings, consultants and other eligible expenses. 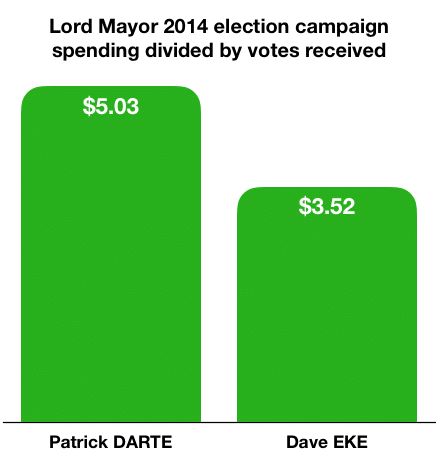 To be clear, I am not saying that candidates can “buy votes.” However, the ratio provides a way to compare the investment made in trying to win election in terms of how many people voted for that candidate.

In 2018, Burroughs has changed his ambition to town Council so is not seeking re-election for the region. There are 4 candidates competing: Mark Cherney, Dave Lepp, Chuck McShane and Gary Zalepa.

In 2014, the 16 candidates running for the 8 seats on Town Council spent a total of $55,207. Instead of looking at individual ratios, I grouped the 15 candidates with some spending into 4 segments and totalled the spending and votes for each segment (the last-place finisher reported zero spending):

These segments illustrate the generally accepted notion that incumbents have an advantage of name recognition, which usually works in their favour unless they’ve disappointed some people. It usually means they don’t need to spend as much to build up popular support. 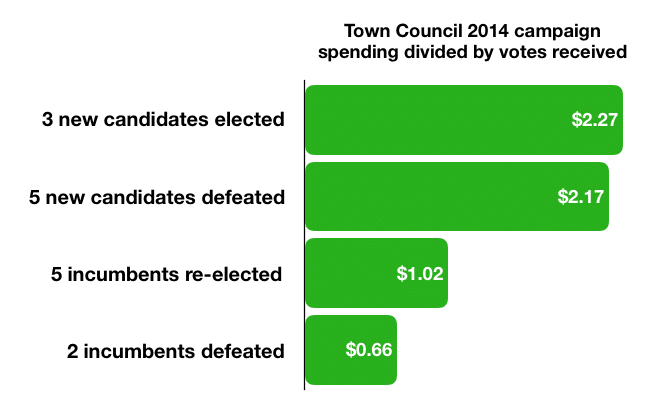 For instance, the 5 incumbents who were re-elected spent an average of $3,100 each and their total spending divided by total votes works out to $1.02 per vote (see chart).

Meanwhile, candidates who are new to the voters need to spend more on signs, advertising and meetings in order to introduce themselves and advocate their issues.

Among the 5 new candidates with some spending, their expenses worked out to an average of $2.17 per vote, but the range at the per-candidate level was $0.44 to $3.40.

What money gets spent on

Looking at what the money gets spent on, there really aren’t any surprises. There are standard expense lines on the reporting forms. I totalled the expenses lines for the 15 Council candidates. The biggest portion of the pie, 36%, goes to advertising, followed by signs at 26% and brochures at 19%. The smaller portions are for office expenses, people such as consultants, postage and meetings. 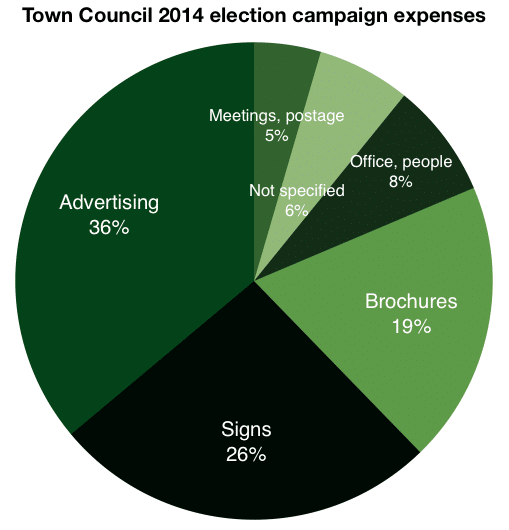 The filing of these expense forms is part of the process of trying to ensure that the democratic process is transparent. However, I’m not sure if anyone ever looks at the forms afterward unless a losing candidate is suspicious about something.

For instance, of the 16 expense forms for Council that I reviewed, which were duly signed by candidates and witnessed by the town clerk, 4 of the filings are incomplete in that they do not show a complete breakdown of how money was spent. That’s the 6% shown on the pie chart as “not specified.”