You are here: Home / Democracy / Stunning wins in NOTL with 58% turnout in 2018 election

Voters in Niagara-on-the-Lake clearly want a fresh approach to local governance with an incredible 58% turnout.

A higher voter turnout had been expected because of NOTL’s population growth and the campaigning of 50% more candidates than four years ago. But the surge of voters exceeded estimates. In 2018, there were 1,812 more voters than four years earlier. The turnout of 8,269 voters in 2018 is up 28% from 6,536 voters in 2014. In previous local elections, voter turnout had not topped 49%.

In the three-candidate race for Lord Mayor, Betty Disero won with 50% of the votes, well ahead of incumbent Pat Darte with 33% of the votes and political neophyte Daniel Turner with 17% of the votes. By not winning re-election, Darte becomes the second Lord Mayor in a row to serve only one term in office. (In 2014, Darte defeated Dave Eke, who served one term from 2010 to 2014.) In 2018, Disero’s 4,135 votes are well ahead of Darte’s tally of 2,732. However, it’s intriguing to speculate: if it had been a two-candidate race – and all the Turner voters instead supported Darte – then Disero still would have won – but by only 1 vote.

With 25 candidates competing for Council, votes were spread more thinly overall. On average, each voter picked 6.1 candidates from the 25 names on the list. (One candidate actually had withdrawn, but still received 186 votes.) 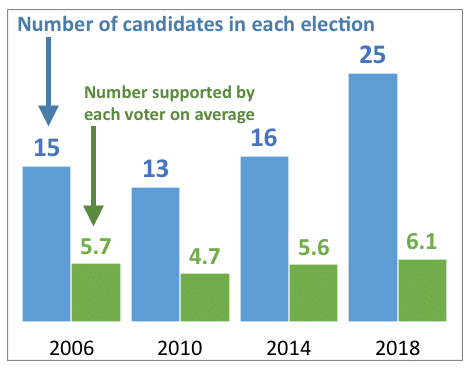 But several new candidates distinguished themselves with strong results. Notably, Clare Cameron and Erwin Wiens were supported by 50%+ of the voters. For the four incumbents running, the usual advantage of name recognition did not help. Only John Wiens won re-election. The other three incumbents ended up in 12th, 14th and 16th place. Once again, it was a close race for the #8 position with only 37 votes separating the winner in 8th spot from the 9th position. 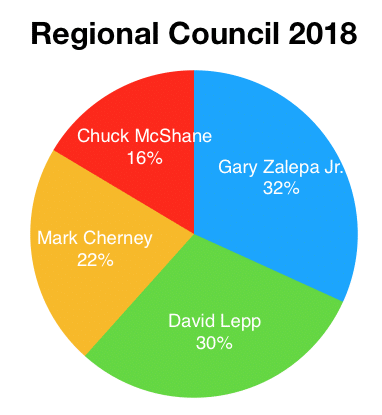