You are here: Home / Democracy / Old Town voters determined who got elected in 2018

In 2018, voters in Old Town tipped the scales for who won the races for Lord Mayor, Regional Council and for seven of the eight Town Council seats in NOTL.

My analysis of the voting patterns from the 2014 election showed voting patterns tended to be relatively consistent among the five geographical polls in Niagara-on-the-Lake. In 2014, the voters in Virgil and St. Davids tended to support the same candidates as the voters in Old Town. Well, that was then. In 2018, a huge jump in voter turnout in Old Town, along with a wholesale rejection of incumbent candidates, gave enough extra votes to decide who won all the races.

At the Community Centre on election night, as the results were being posted, I noted stunned looks on the faces of some people I know are from Virgil and St. Davids. Now, I better understand their shock. Today, Town Clerk Peter Todd released the results by poll showing the number of votes cast at each voting place. With analysis of the votes at each poll, it’s clear that the pattern of preference for candidates was decidedly different among the five polls.

One of the biggest factors was voter turnout. Because of population growth, there were 5% more eligible voters, but 28% more voters took the time to vote – 1,812 more voters than in 2014. The turnout of 58% topped previous levels which were below 49%. According to reporting by Niagara This Week, the big jump in NOTL voter turnout was exceptional among the 12 municipalities in the Niagara region.

Not all voters vote in each of the different races. But comparing the tally of votes for the Lord Mayor position is a way to gauge participation at the poll level as well as the pattern of the increased turnout. At the Old Town poll, 51% more people voted for a Lord Mayor candidate compared to 2014 (see chart). In Virgil, 34% more people voted for Lord Mayor. Those are the two largest polls, but all polls showed increased in voting. Glendale moved up into the range of voters in Queenston.

The race for Lord Mayor was a three-way race between incumbent Pat Darte, challenger Betty Disero moving from a Council seat, and neophyte Daniel Turner. In the end, Disero won with 50% of the votes compared to 33% for Darte and 17% for Turner. However, of the five polls, Disero won three – 67% of the votes in Old Town, 49% of the votes in Queenston and 45% of the votes in St. Davids. The chart shows the percentage of votes each candidate received in the respective polls. 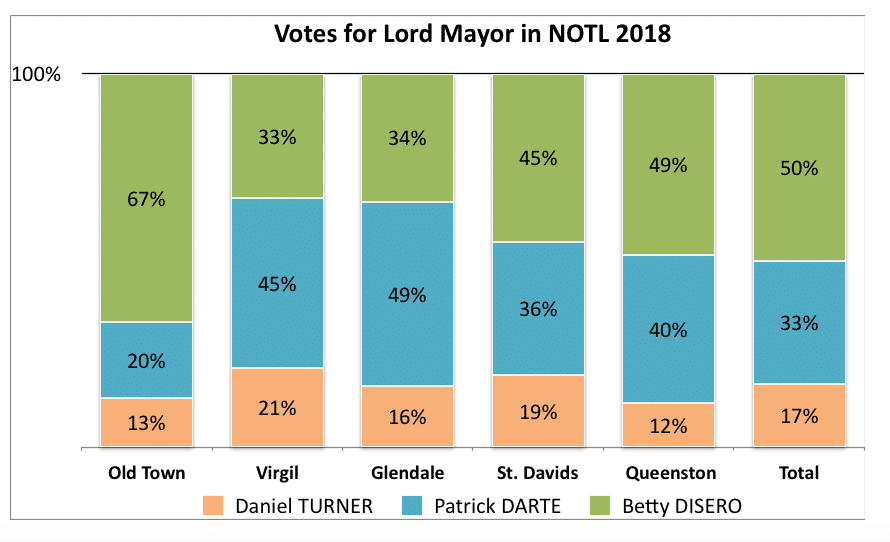 Darte was the clear favourite with 45% in Virgil and 49% in Glendale. However, there seemed to be an appetite for change even in Virgil, where Turner got 21%.

When there are more than two candidates, it’s inevitable that votes will be spread more thinly. Disero polling 50% overall is still significantly better than the 38% of votes that made Dave Eke the Lord Mayor in 2010 in a race with four candidates.

In the four-way race for Regional Councillor, a similar pattern played out. There was no incumbent running. Gary Zalepa Jr. won the spot with 32% of the votes, helped enormously by 47% support in Old Town. David Lepp had won the Regional Councillor race in 2006 before being defeated by Gary Burroughs for the position in both 2010 and 2014. In 2018, he won the most votes in four of the five polls, but not enough support in Old Town to close the gap with Zalepa.

Mark Cherney fared relatively well in Virgil and Glendale while Chuck McShane got the most votes in St. Davids. 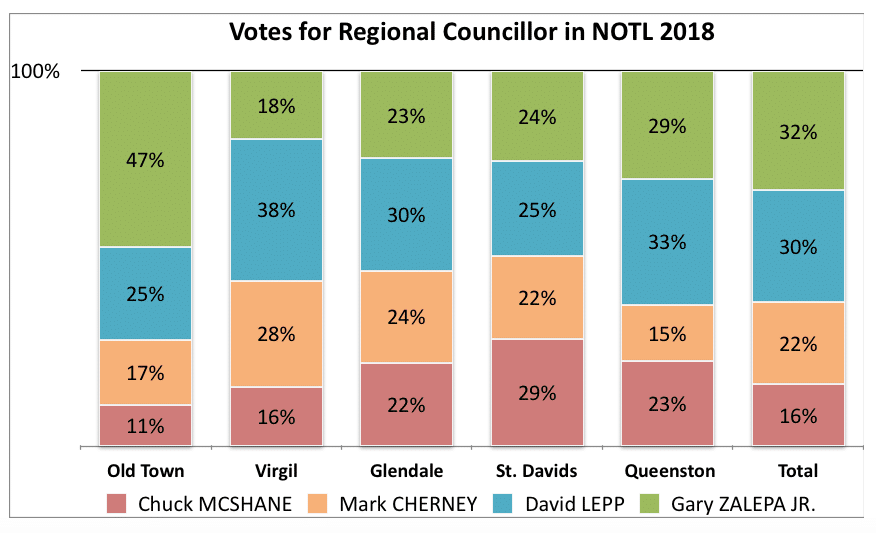 In the race for the eight seats on Town Council, there were 25 names on the ballot. As noted in my election-night article, overall voters picked 6.1 candidates on average for the eight positions. This was up from an average of 5.6 candidates per voter in 2014. However, voters in Old Town voted for more candidates on average – picking 6.4 names on the ballot while Queenston voters chose an average of 5.6 candidates (see chart). This pattern also could reflect a voting strategy advocated by some to vote for eight candidates if there were people you didn’t want to see elected. 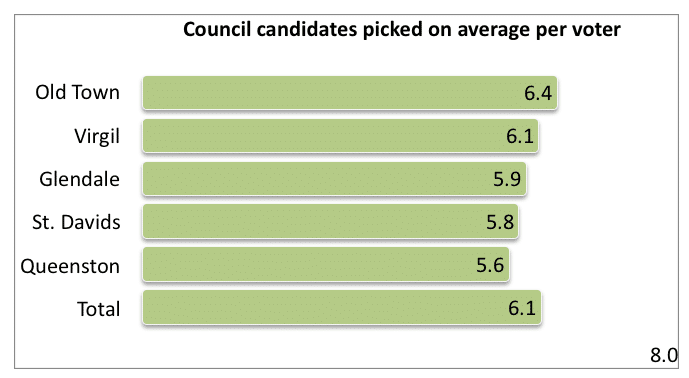 There are seven new faces on Council, with only one of the four incumbents winning re-election.

In the end, only the top three candidates were consistently supported across all five polls – Clare Cameron, Erwin Wiens and Gary Burroughs.

In the chart below, the green shows the top eight candidates in each of the polls. The black line between Norm Arsenault and Sandra O’Connor shows the cutoff for the 8 positions. 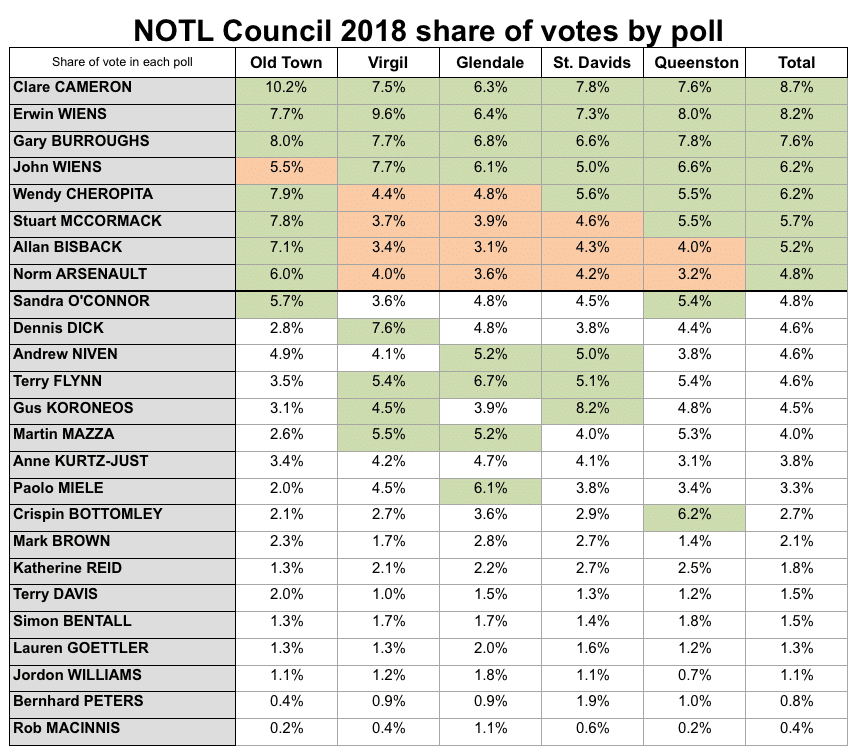 In Old Town, O’Connor was in the top eight, pushing John Wiens down to 9th spot there, completing a shutout of incumbents in the poll.

In Virgil, four candidates would have moved up, including two incumbents. The number of votes in Glendale is too small to influence overall results, but it was the only poll to support all four incumbents.

Of the three incumbents who didn’t win re-election, only Terry Flynn did well in three polls and came within a few votes of O’Connor in Queenston.

In the counts of overall Council votes, the five candidates who ended up in 8th to 12th place had only 121 votes separating them – fewer than the 186 votes received by the last-place finisher who had withdrawn from the race in August. Once again, it demonstrates how close the races are, and the payoff from campaigning vigorously to secure every possible vote.